For one of the founders, Patrik, his love for the handpan began roughly six years ago.

“I once discovered it on Youtube and started researching what this instrument was. After a few months, I managed to buy a used instrument. ””

The beginning of the MAG's history was when Patrik's instrument got out of tune, so they traveled with Áron to the makers in Spain to get it retuned. Here they recognized the great opportunity to set up a handpan manufacturing company. At that time, there were only 5-10 manufacturers in the world, orders had to wait months and fortunes to be paid for the instruments as well as the retuning.

The MAG's first handpan workshop was started by Áron and Patrik with their saved money in a neglected building of the distillery in Győr. After that, due to a lucky coincidence, they met the other two members of the founding team, Ricsi Hársfalvi and Peti Bognár.‍

“They, although in a very amateurish way, started to make the instruments even then: they tried to create the handpan with hand hammers, while putting the metal shell in the sand.
The boys had some kind of technical knowledge background, we had the money we could invest, and we all had a passion for the instrument, so we got together. We have expanded the necessary knowledge about the production from the internet and from our friends who are already working in other workshops. ” (Patrik)

After the imperfect tools, the machine collection grew little by little. Their first kiln was rebuilt by themselves from a ceramic kiln, then over time they acquired more powerful press tools, compressors, and now they own a serious heat treatment kiln. Once they had the basic knowledge, they experimented a lot with different techniques, different materials, scales. From then on, their main principle became to achieve the high quality as soon as possible, which than they achieved.

Since the big meeting of the four, the company has undergone many great developments. They have already managed to get much more serious equipment, their instruments hit the standards of the best manufacturers and are bought by famous handpan players. Their workshop and team are growing, they have already set up a workshop in Budapest in recent years. So there is no shortage of customers, but they are also working to build up a large enough stock for the HUG festival, where many people come every year to buy.

Currently, they are in the middle of workshop expansion, trying to increase capacity and make work more efficient. In addition to the growing workshop in Győr, a smaller workshop has already been set up in Budapest.

“It almost fits into a folk tale as we started it all, with two hammers that we also had to experiment with to figure out which one is good. In the beginning, we didn’t even have an oven, so we heat-treated the handpans with a pig scorch. It was good for heat treatment, but there was no direction in it, it just went on a rough basis. ”

Roughly ten of their scales are the most popular, and what they are constantly producing, but they also make other instruments of different scales. In terms of materials, they offer instruments made of cold-rolled nitrided steel and stainless steel. The main difference between these is that the stainless steel instrument rings longer.

MAG Instruments strives to be as present in the world as possible, they already have American and other connections for resale. They also ship their instruments to stores in Austria and Germany. Their long-term plan is to try to set up a larger-volume instrument manufactory that would eventually make instruments other than handpans.

In addition to making instruments, the MAG team often makes workshops and in every summer since 2019 organizes its own handpan festival, HUG (Hungarian Handpan Gathering& Lifestyle Camp), to make the instrument iven more popular. 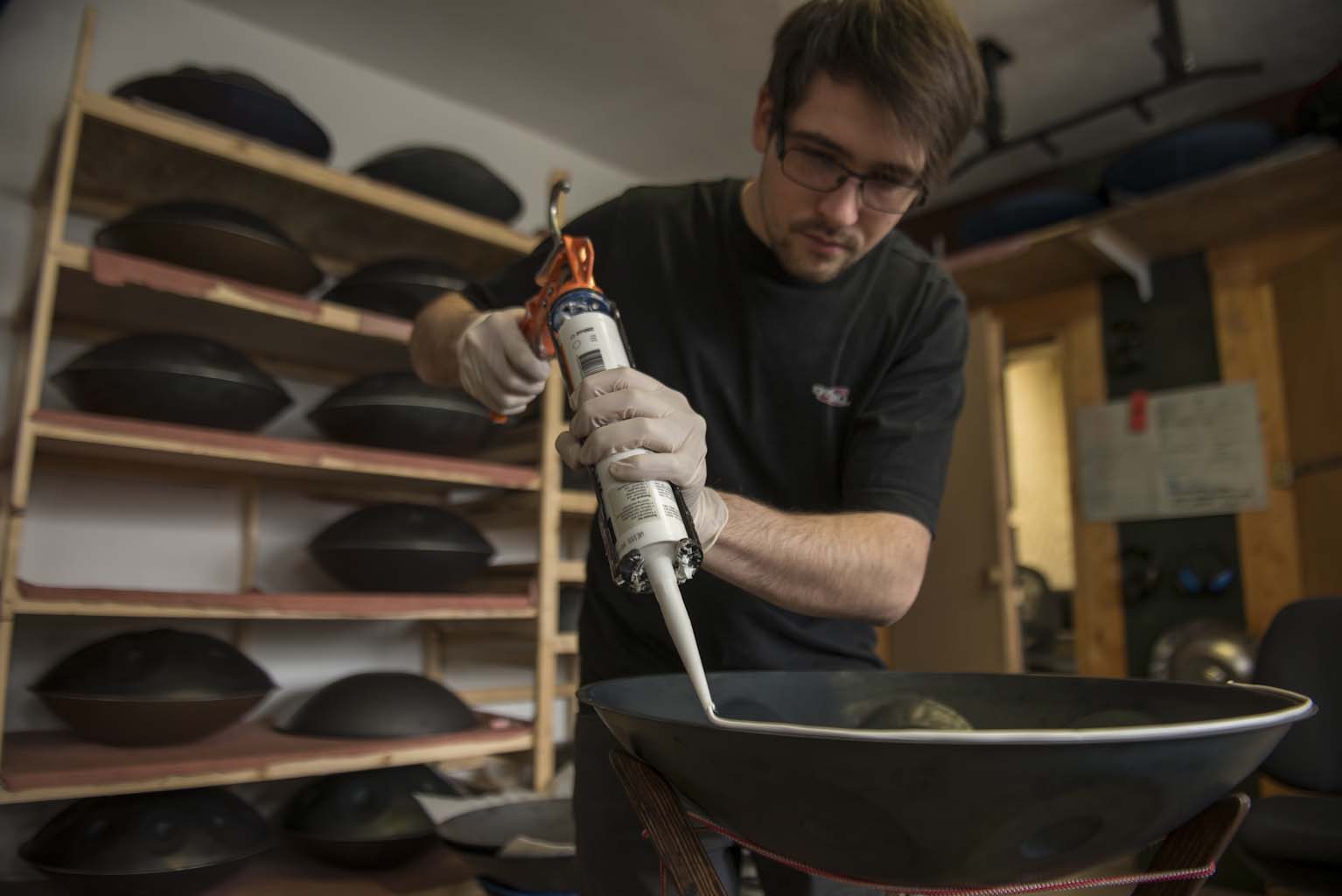 “The handpan gives me the sound I’d like to listen in my whole life, and it’s almost still inconceivable that I can not only listen to it, but also make the instrument. Making this instrument teaches patience and self-discipline, it requires concentration, so it is important to be aware of when I should and should not start an instrument, because how I feel is manifested in the instrument. ”

The sound closest to me: simple and pleasant, like the Amara scales.

“In instrument making, the joy of creation, the creative process is the most appealing to me, and the form in which I can implement technical knowledge. I like to express with music what I can’t say in words. ”

“I’ve been playing music since I was 7, I’ve been playing the violin, guitar, drums, handpan. I play music in the ToSoDa Project, so my life revolves around music. Making an instrument is a challenge, an adventure, and it feels good to do something for myself for the first time in my life, and not for someone else. ”

Favorite scale: a self-developed scale called Blue Beard, which is a blend of melodic and natural minors that makes it all chromatic.

“I grew up in a musician family, studied piano and saxophone, worked as a bar pianist in Italy, Austria, Spain and Hungary for 4-5 years. Why did I even choose the handband now? Its sound is catchy, though simple, yet exciting, plus using the more handpan at the same time is the same as a piano. For me, music is self-expression, a source of joy as a member of the band ToSoDa, through which I can connect with people. ”

“Music has been a defining part of my life since I was a child. My main instrument is the trumpet, but I also play percussion instruments. I joined the team in 2018, which was a very positive turn in my life. It’s very inspiring to work with like-minded people, I feel like I’ve found my place here. ”

My favorite scale: my self-developed scale is Mali, which is an extended African scale

Ever since I met the handpan and MAG in the summer of 2018, the instrument has become a part of my everyday life. For me, the handpan is a wonderful companion in allowing time to spend with myself and realizing inward attention. Thanks to the handpan, making music is a source of joy for me again. Being a member of the team is a great gift and opportunity. It is a value for me to be able to spend my days in such an environment.

The Pygmy scale (F2 and A2) is very much in my heart, but it also has space for the scales Amara, Hijaz and Asha.